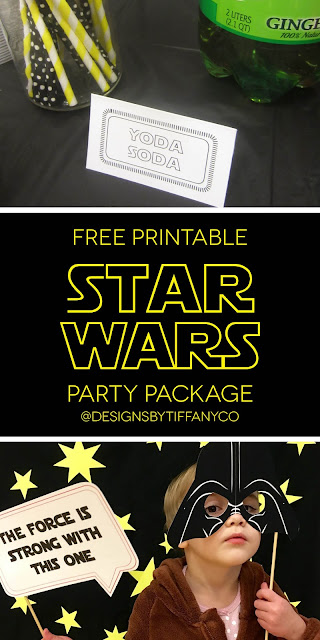 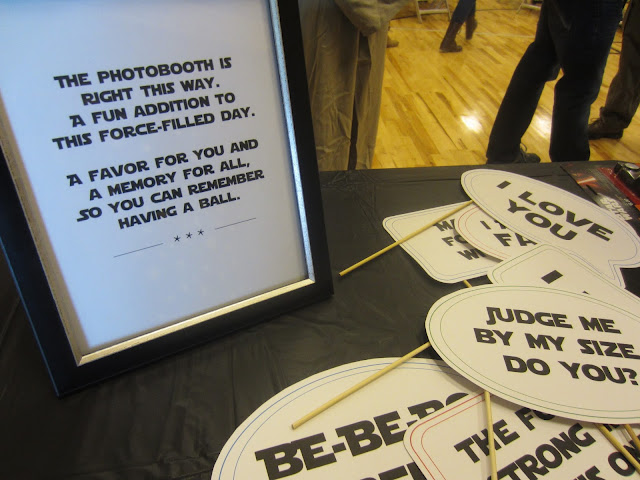 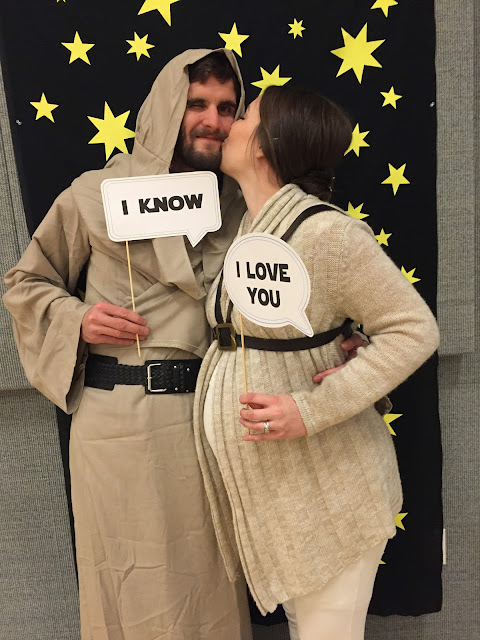 Literally days before I had my baby, I threw a birthday party for my husband! He’s always been a Star Wars fan, but with the new movie coming out, there was more excitement to have a great party for him. He’s very much the type who doesn’t care for parties, but since this was the big 3-0, he actually wanted a party! And I love throwing parties, so I was very excited to put this all together for him. 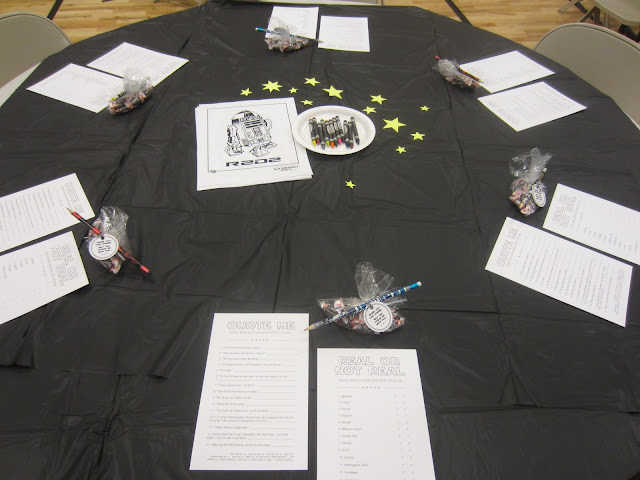 We just invited family, so there were going to be guests of all ages coming. Because of this big age span, there were activities made to please all age groups.
I made up 2 different paper games for the adults and older kids: a quote “guess who said what” game and a true or false game, both involving all 6 of the movies.
Then for the little kids there were coloring pages (because adults want to talk to each other without their kids butting in! AmIright?? ), Build a Droid/Character (paper dolls), Pin the Bun on Leia, and gathering candy from the Death Star piñata!
*Just Google “Star Wars free coloring pages” to find a limitless amount of coloring pages. 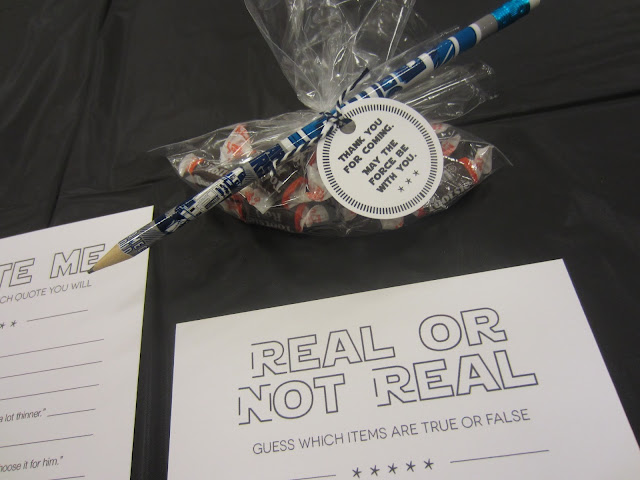 A pencil to use for the paper games and as a thank you favor.
Found at the Target dollar spot, 6 for $1! 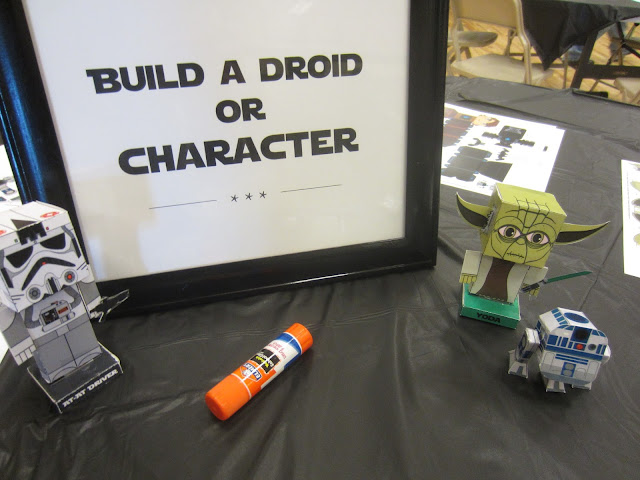 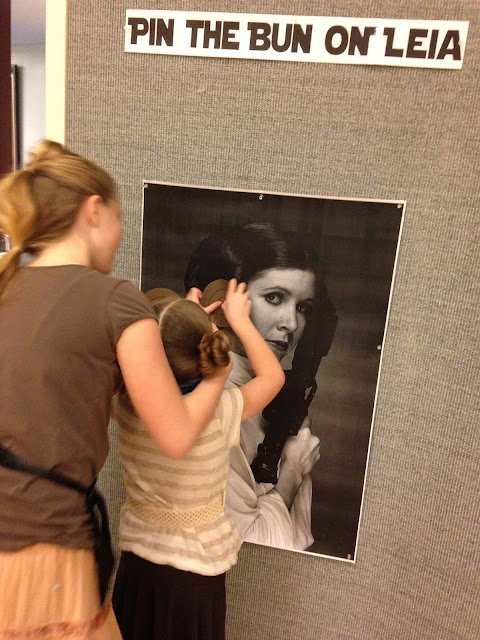 For Pin the Bun on Leia, I’ve heard a lot about how Staples can print huge poster prints for super cheap. I decided this would be a great time to look into it and try it out. Turns out, it’s true! It’s not the greatest of quality, but for a game, it worked great. The photo I found online wasn’t even the biggest resolution I could find, but again, it still worked out fine.

To make the buns, get brown card stock and using a bowl which would be about the same size as her bun, trace around the edges of the bowl to make perfect circles. Make enough circles for your guests. Cut out. (Or better yet, use a Cricut to make your circles!) Then, using a black Sharpie, draw the swirl in the middle. 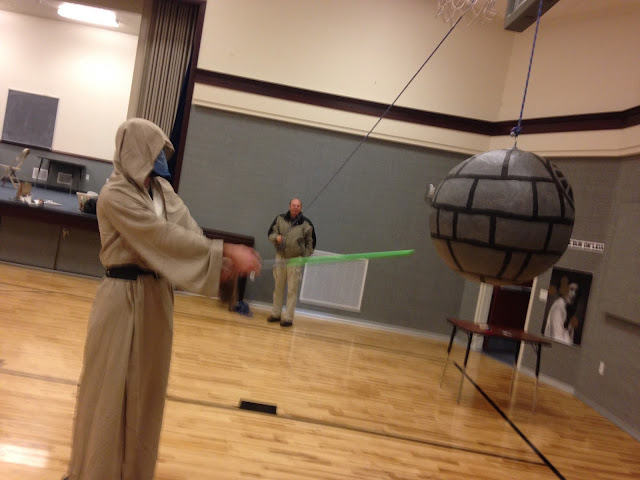 Yes, I made this gigantic piñata of the Death Star and yes I just wanted my husband to break it all by himself! The kids didn’t even seem to mind that they didn’t get a turn to whack at it, but loved getting all the candy as it fell.

I won’t even go into detail on how I made this because there are plenty of blogs out there to explain how to make one, but because this was my first time ever making a piñata, I found this site to be the best reference. I will say I was able to find this gigantic balloon at the Partyland store, which was a total surprise. I did not think a balloon this big even existed!

I also painted a plain wooden rod, found at any craft store (Jo-Anns, Hobby Lobby, Michael’s) to look like a light saber, so that was a fun touch. 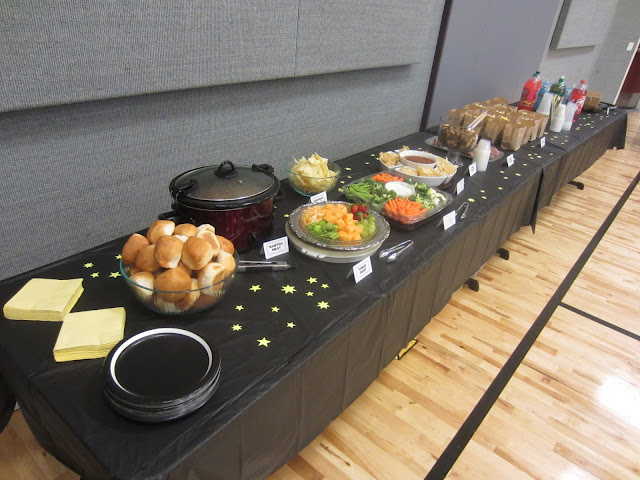 And what’s a themed party without themed food labels?? We had originally planned to have The Empire Strikes Back playing in the background on a projector, but we couldn’t get it to work! So we had the soundtrack playing instead, but the movie was what inspired me to serve finger foods for lunch. 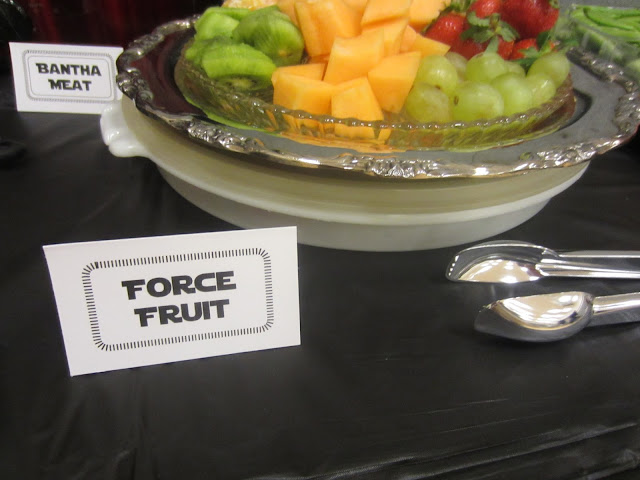 There are fun Star Wars themed foods everywhere online, so I stole those ideas except for “Bantha Meat” for pulled pork sandwiches and “Force Fruit” for the fruit. But it was really fun to look around and see what others had come up with! 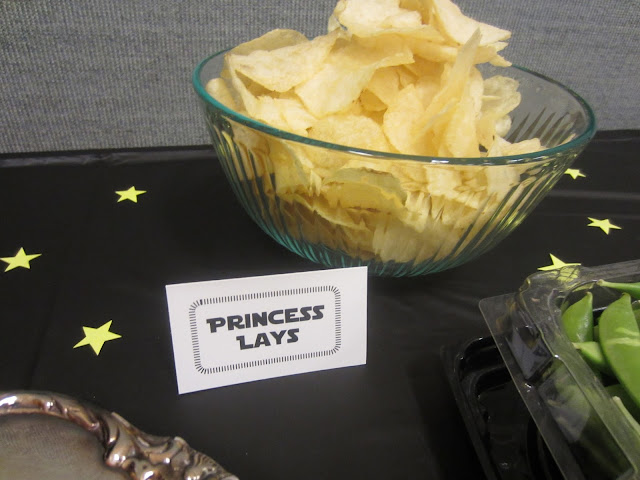 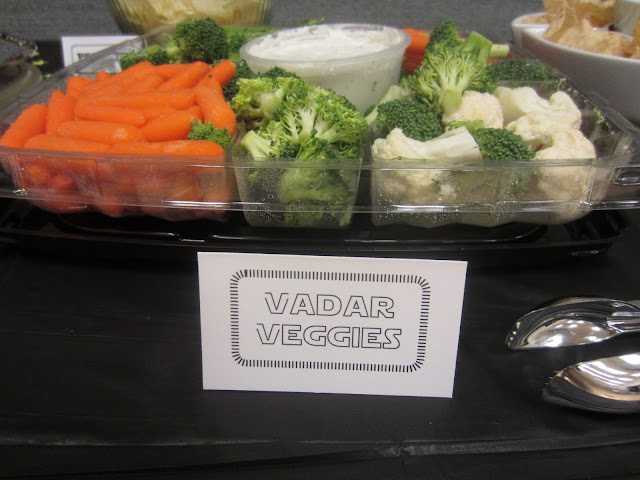 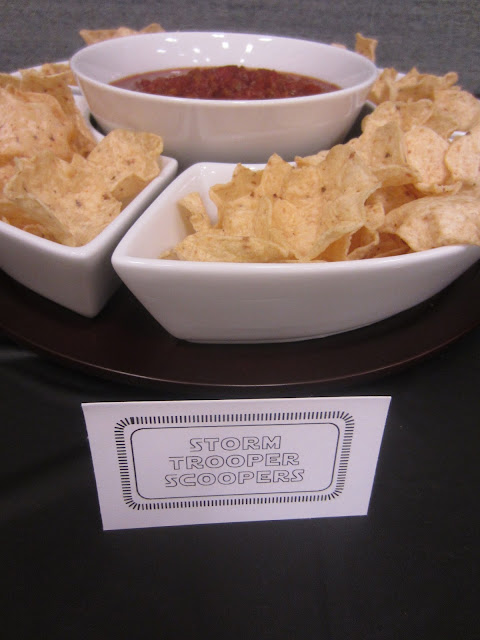 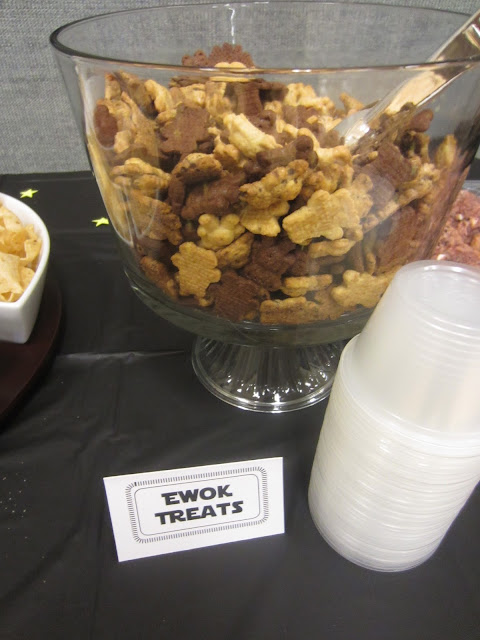 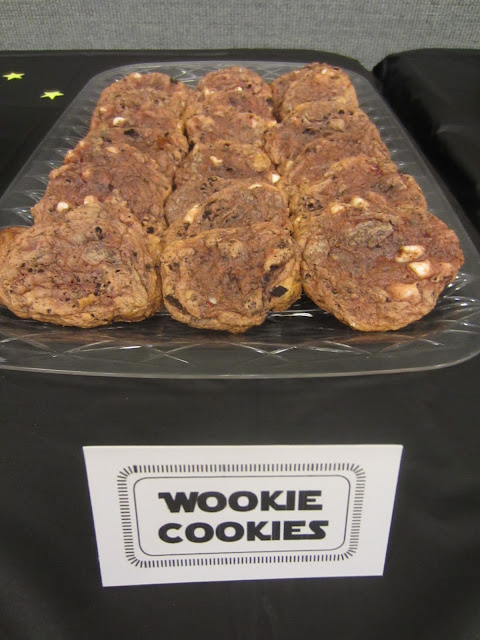 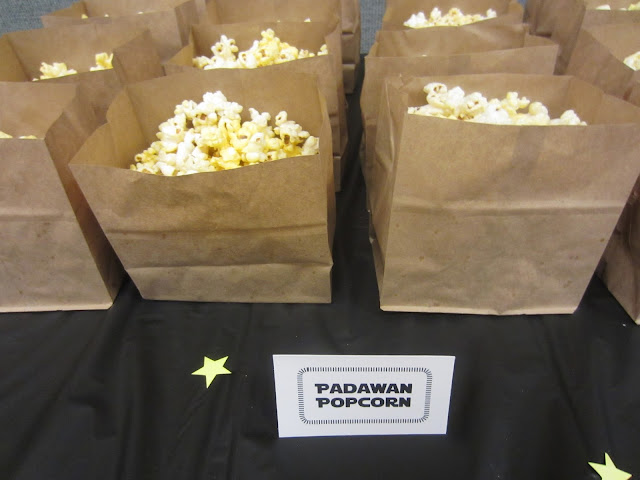 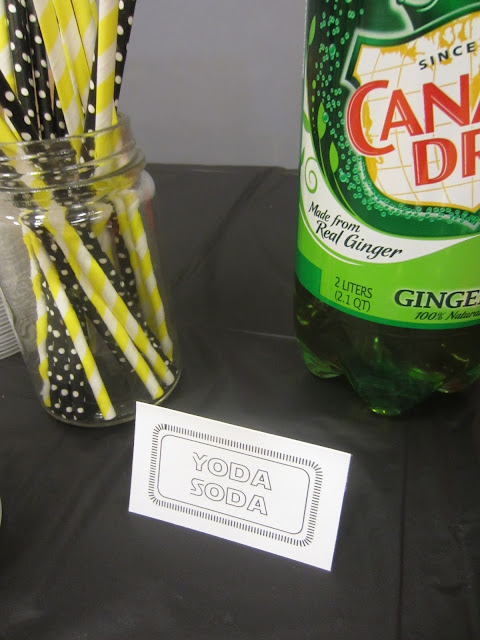 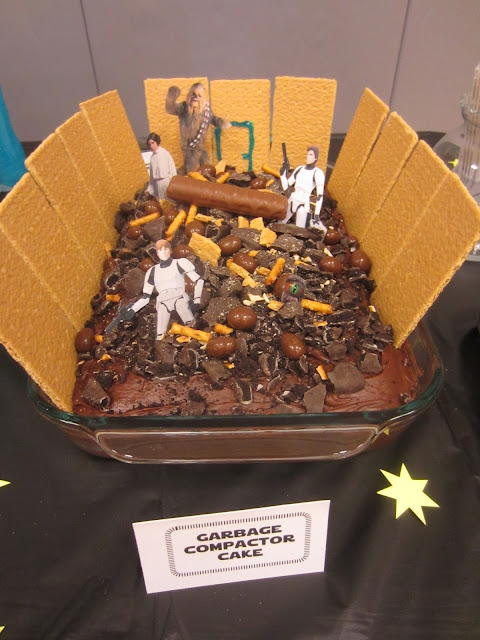 This cake was so much fun! Again, I did not come up with this concept, but stole the idea.

Because most of this party package isn’t very original, just the designing, I decided I should make the entire package a freebie. So I hope you enjoy my take on an adult Star Wars party!