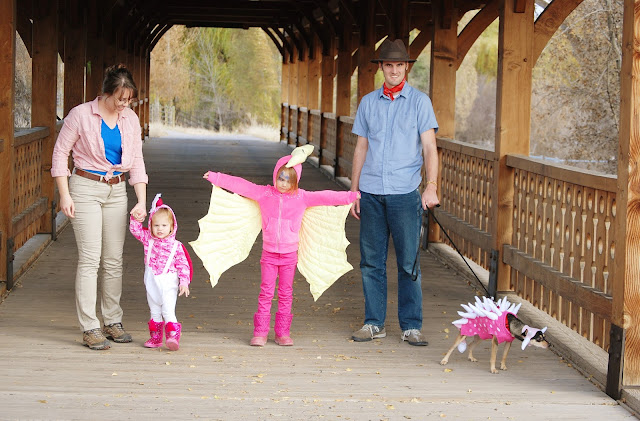 I’m such a sucker for family themed Halloween costumes and I thought I might not be able to talk my 5 year old into joining us this year, but we did dinosaurs and she was all about it! What was also fun was dragging our dog into our family’s silliness. She’s family now, so she gets to participate!

Can you guess who everyone is?? 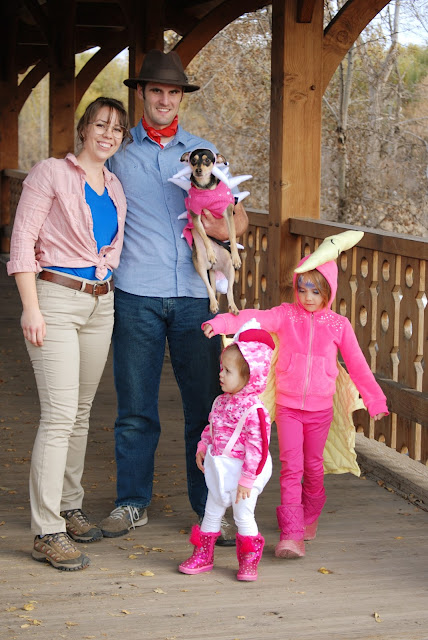 Even though I don’t have blonde hair, I decided to be Ellie Sattler. It gets really cold here on Halloween, so there was no way I was going trick-or-treating in shorts!

My husband is Dr. Graham. Both of our costumes were easy and required things we already had.

Our dog Harley is an Ankylosaurus.

And our girls are a Pterodactyl and a Corythosaurus hatchling.

At first my daughter wanted to be T-Rex, but I thought that would be boring so I asked if she wanted to be a Pterodactyl instead. She was all for it and loves her wings! 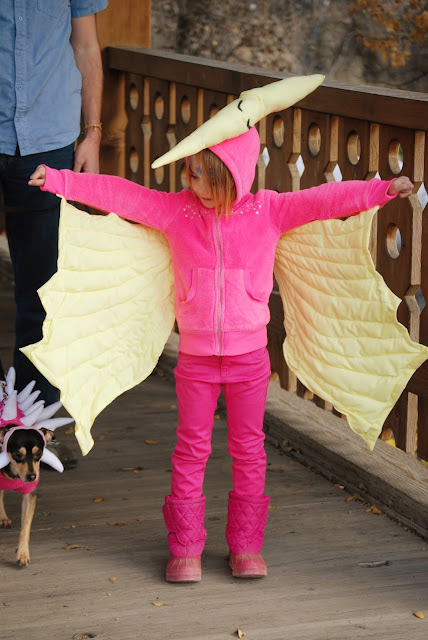 I’m horrible at explaining things and I didn’t document my progress, but I’m pretty sure the pictures itself are pretty explanatory. But if you need more instructions, here is a rundown on how I made her costume:

1. I bought the jacket at Goodwill. She already had pink pants and chose to wear her pink snow boots.

2. Then I made the wings and head piece from an old yellow bed sheet I already had on hand.

3. I measured how long to make the wings from the arms on the jacket and then down vertically from

there, I measured it down to her knees. Add an inch or two to make up for the seam allowance.

4. With your measurements, fold your fabric in half or fourths, if you have really good scissors and a strong hand. Draw with a pencil the wing shape. Cut out.

5. Sew two pieces of the wing right sides together leaving a hole in order to turn it inside out.

7. Fill with some batting, but not too much. They’ll be kind of heavy.

9. Sew along the edge leaving a little more than half an inch from the edge.

10. Sew swoops down throughout the middle of the wing to hold the batting in place and to create more definition of the wing. *Do steps 5-10 to the other wing.

11. Tack on wings to the jacket. I sewed it on in three places: her wrist, elbow, and near her shoulder blade. 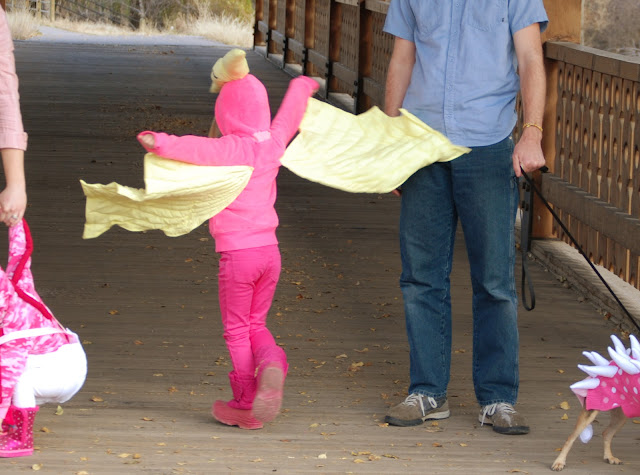 1. Fold your fabric in half.

2. Draw out the type of head shape you want.

4. With right sides together, sew together and leave a hole in order to turn it inside out.

6. Fill with batting and make it is pretty packed and firm.

7. Get a wire hanger or some good wire. Cut and shape it in order to bring more definition to the back of the head if you need it. Hot glue some felt on the ends of the cut wire. It will most likely be sharp.

8. Stick the wire up into the head. Sew the hole closed

9. Hand sew the head onto the hoodie.

10. Cut out some eyes from felt or glue on some googly-eyes.

11. With her headpiece, the hood wasn’t long enough to keep it in place on her head. So I cut a hole in the back of the neck on the jacket where the hood and jacket seam meet. I patched up the hole with some pink fabric. You can see the patch in the picture above. ^^ The head piece was still too heavy, so I ended up safety pinning her hood together under her chin so it was nice and snug. 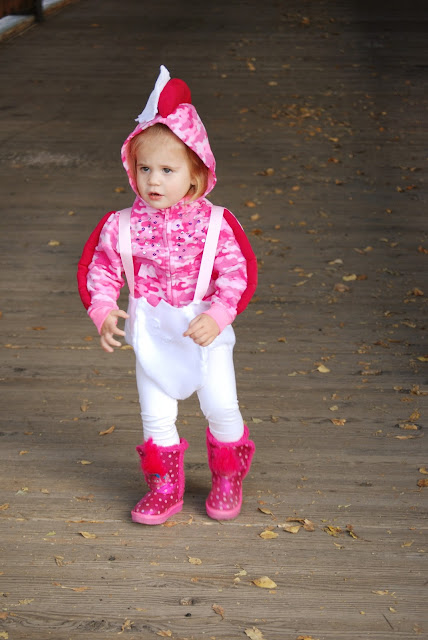 1. I bought her jacket from Goodwill, a half yard of fleece for the egg shell from a fabric store, white leggings from Target, and the dark pink fabric I had on hand.

2. To make the stripes, measure out the arm stripes by using the jacket for the length. Add an inch for the seam allowance. Width is about 2-2.5 inches.

3. Fold right sides together and sew leaving a hole on the bottom.

4. Fill the stripe tubes with batting.

6. Hand sew the stripes onto the arms.

7. For the back stripe, measure out the length of the back and repeat steps 3-6. It is slightly longer than the arms if you’re making this for a toddler.

8. To make the headpiece, fold fabric together. Draw out the crescent shape you want. Cut out. Follow steps 3-5. Hand sew on top of the hood.

1. Follow these instructions on how to sew a sphere.

2. Cut in a jagged fashion along the middle of the sphere. Back stitch or hand sew seams that were cut off so they won’t unravel.

3. Cut out circles and ovals and sew them onto the sides of the egg.

4. Cut out leg holes on the bottom by using a onesie as a reference. The fleece won’t fray.

5. Get 2 wire hangers or some wire. measure out the sides of the egg shell and cut.

6. Hot glue some felt on the ends of the sharp wire.

7. Cut out strips of fleece to cover the wire. Hand sew along the sides of the wire to keep it in place. The wires help give the egg its shape.

8. Get some ribbon or sew some fabric together to make straps.

9. Tack onto the egg on the front and back to make suspenders.

10. Cut out two circles of white fleece. Cut the edges in a jagged fashion.

12. Hand sew circles on top of the hood. 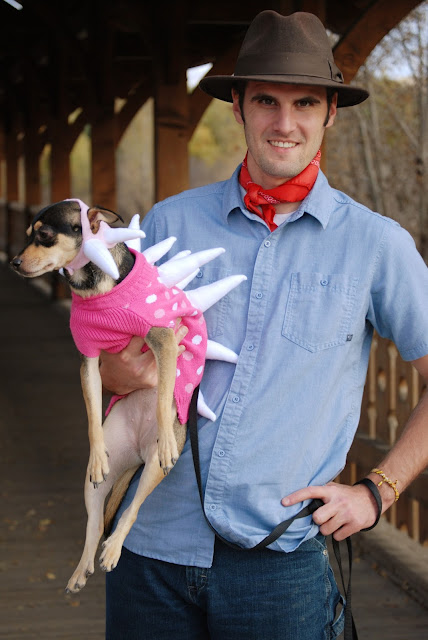 2. Cut out lots of triangles to make the spikes. I did 5 columns of spikes. I had 4 large spikes on the ends of each side (8 total), 6 small spikes next to those (12 total), and in the middle I had 5 medium spikes.

3. Sew one side of the triangles together leaving the bottom open.

4. Fill the triangles with batting.

5. Hand sew the spikes onto the dog sweater.

1. Fold a piece of matching fleece together.

2. Cut out the kind of shape you want. I tapered her tail to go from the back of the sweater down into a tail.

4. Sew a wavy pattern in the middle to make it look textured.

5. Sew a ball of white fleece together.

8. Hand sew the wider end to the sweater.

1. Fold a piece of matching fleece together.

2. Cut out a mask shape that will fit your dog.

5. Hand sew spikes onto the cheeks of the mask.

6. Sew velcro to fasten the mask on.

*Every time she would shake, her mask would fall off… So we turned the mask around and that seemed to work better. In the photo above her mask is turned around. 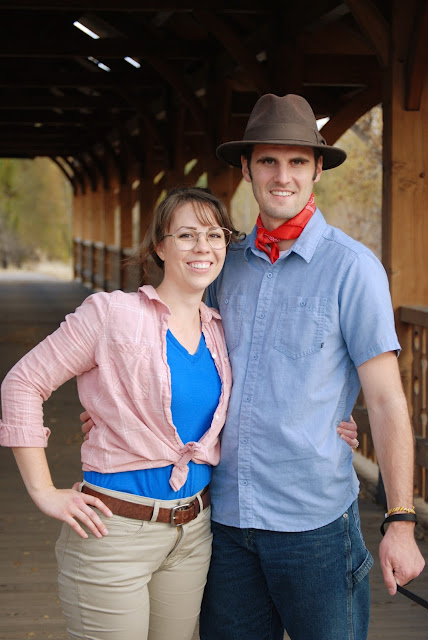 The kids and the dog’s costumes were pretty time involved, but if you’re looking to avoid buying costumes and making them yourself, this is the way to go! #clevergirl