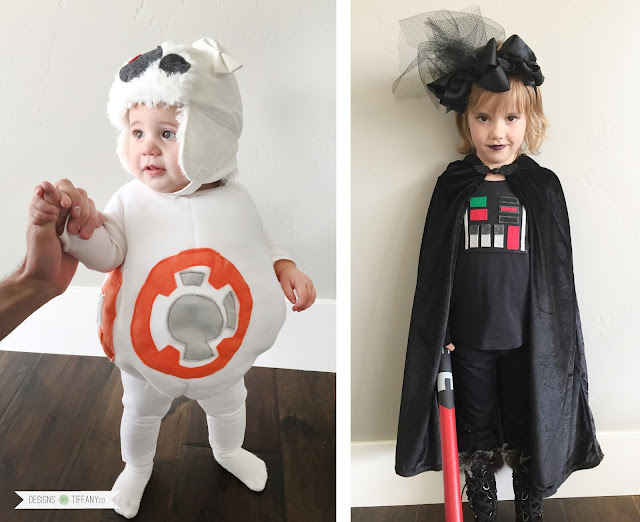 I can’t tell you how giddy my kid’s costumes are making me! They are so stinkin’ adorable!!
Now I will give a disclaimer: this is not a tutorial because I really had no idea how I was going to pull this off, so I didn’t take pictures of the process. This is simply a post to give you a few ideas on how to make these costumes for yourself! For the savvy sewist, I know they could tell how I did it, but for those wanting step-by-step instructions, I’m terribly sorry I did not provide that. I’ll try to explain what I did because it may be helpful. 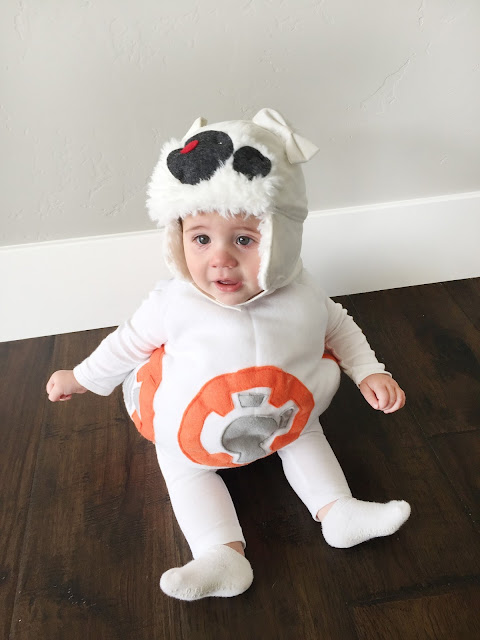 This costume was the one I had no idea how I was going to pull off. I was going to buy the baby pumpkin sewing pattern, but I looked at it and was like, “Yeah, I could pull that off myself.” Wrong…. As soon as I started cutting the fabric I’m like, “What did I get myself into??” 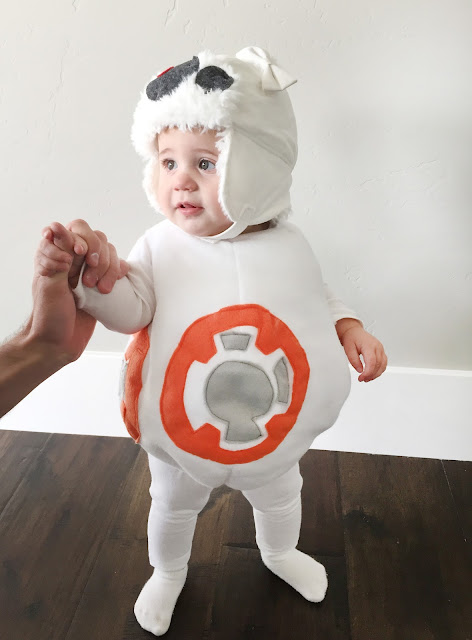 Then I remembered there’s such a thing as making a ball out of fabric. I Googled a pattern for it (because when it doubt, Google it) and saw from Wiki, How to Sew a Sphere exactly how to do it. 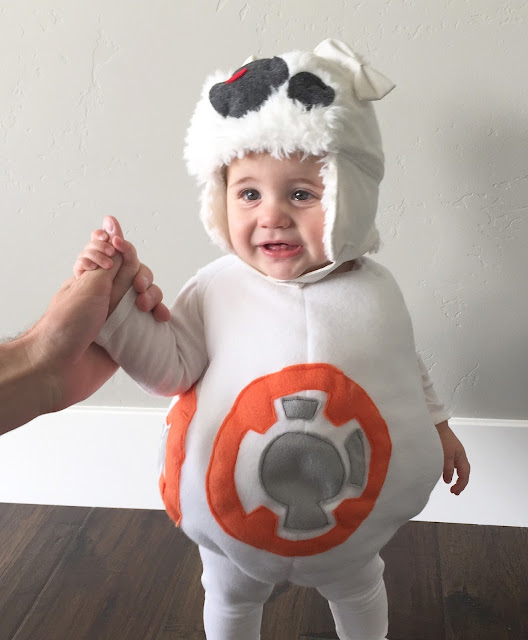 And it was too small…

That’s one reason why I don’t like sewing so much because I always feel like I mess up so much! So after I was done mourning over the 4 hours I had completely lost, I made the second one which turned out the be the perfect size! Hey, I guess practice makes perfect, but I just call it luck.

Down the back seam from one of the sphere pieces, I unpicked it down halfway so I could have an opening so she could get in and out. I used velcro as fasteners. 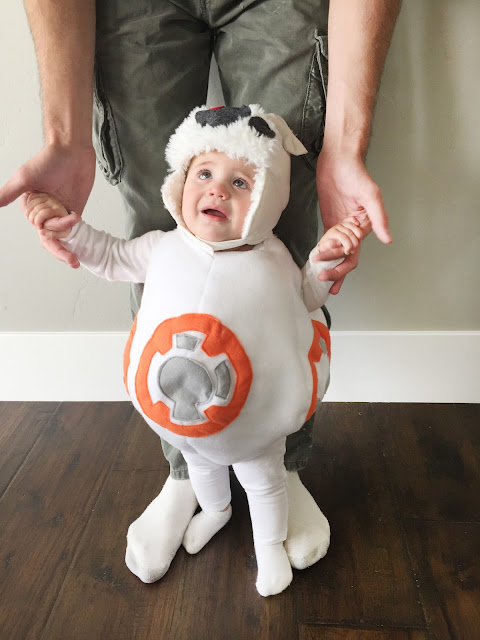 (She hates her costume, but that doesn’t matter.)

After the body was finished I used a onesie to figure out how big and far apart to make the leg holes. Then my husband helped shimmy her into it so I could see where I needed to cut holes for the arms.

This is made out of fleece, by the way, so there was no need to stitch around where I cut to prevent fraying, so that saved a lot of time. 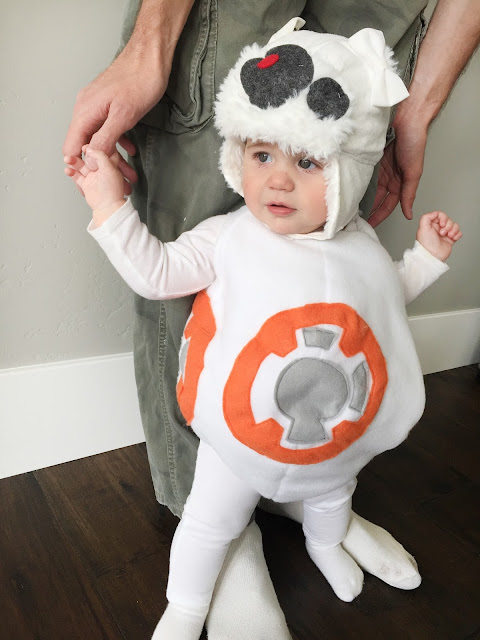 Then I used felt for the orange and grey applications so I didn’t need to surge or sew around it to prevent fraying. Another time saving technique! How I made each circle application was just by cutting out a circle, cutting out the inside, and then from Google I looked at BB-8’s different designs and made each one different like his are. BB-8 does have six different ones, but I only made four because I felt her head and bottom didn’t need any on it. And it saved time! Then I sewed them directly onto the body.

After everything was sewn I filled the body with cotton filler. I tacked it on so it would stay in place where the seams are so it wouldn’t pucker in odd places. 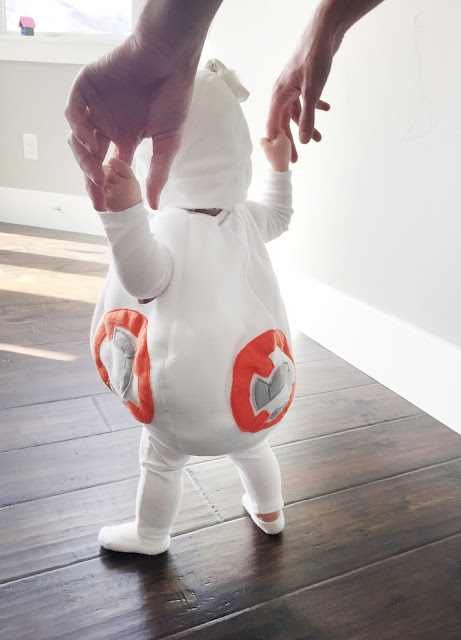 View of the backside. 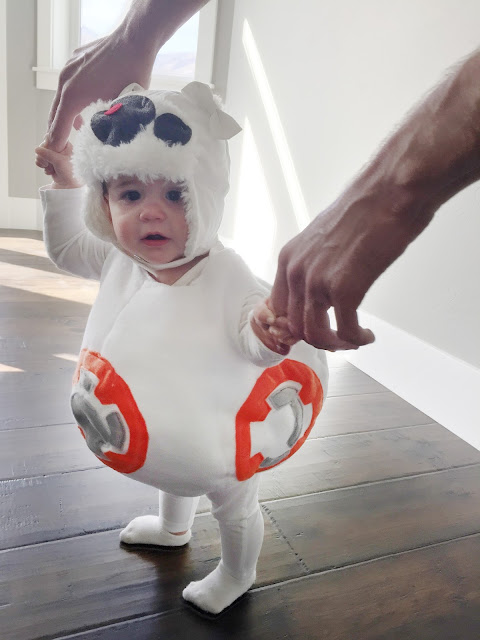 Then for the eyes I cut out circles and safety-pinned them on because I didn’t want to sew them on her nice winter hat. If I had an old white baby hat, I would’ve sewn them directly on and poked a few antennas into the top.

For the arms and legs I had her wear a onesie and leggings. 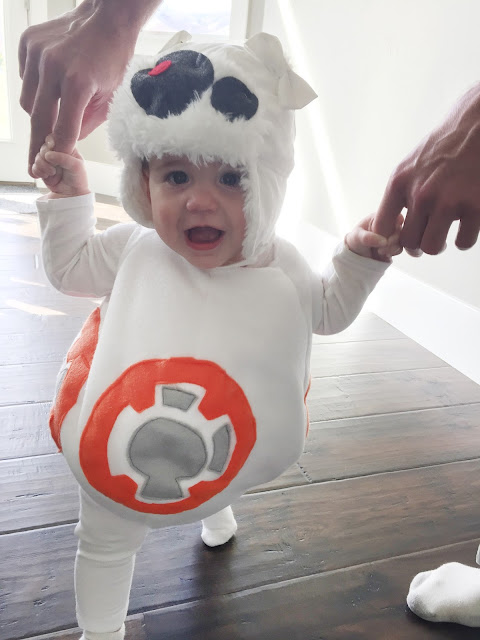 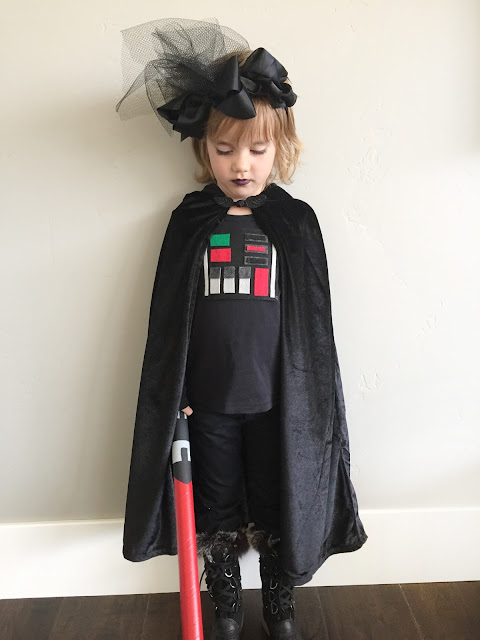 My daughter loves Darth Vader. I don’t know why because she doesn’t seem to like any other villains, so it’s not like it’s a love-for-bad-guys thing. But Darth Vader was what she wanted to be and I hit a home run with it because I already had an idea on how to do it and knew it would be easy. 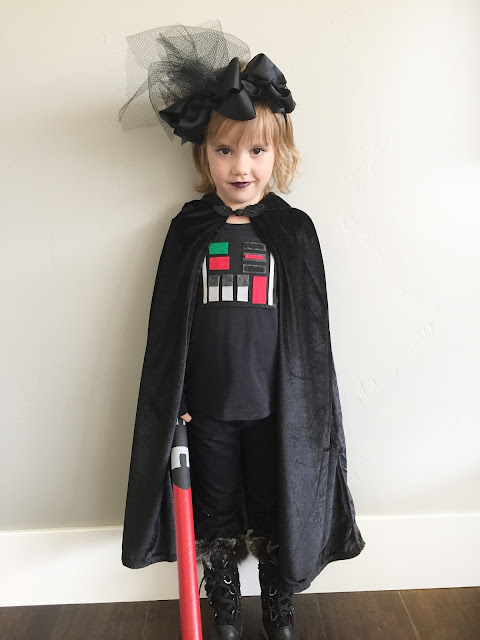 She already had black pants, black shirt, and black boots, so half of the costume was already done. I made the chest-piece out of felt, hot glued the button pieces onto a black square of felt, and hot glued it onto the shirt. 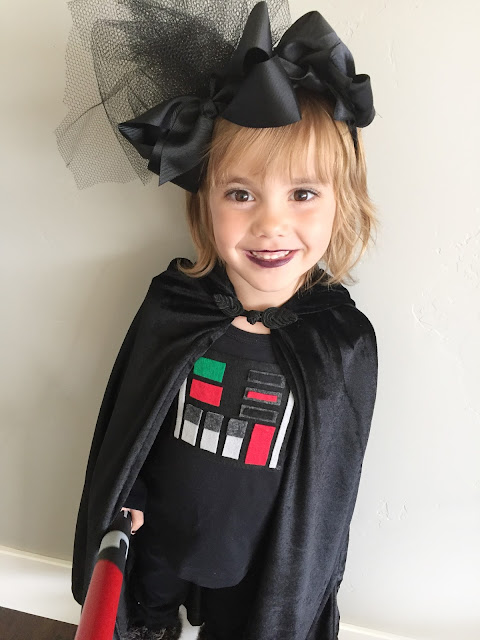 She really wanted his helmet, but I have a no-mask rule. I like to see my kids’ pretty faces! So we compromised by letting her wear lipstick..! 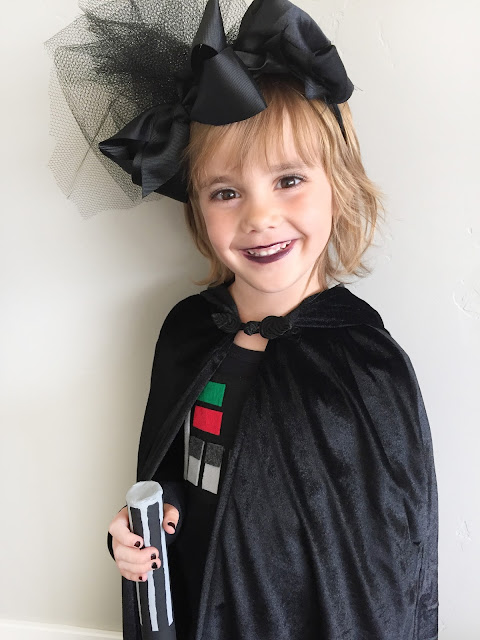 I wanted this headpiece to be big (like small-town-Utah-hair) so it would represent the helmet. I had a black headband and wrapped black fabric around and played around with it so it would poof up. I hand sewed it onto the headband so it would stay. I did the same with the netting – played around so it poofed up nice and big and hand sewed it on. I bought the giant bow at a boutique and clipped it onto her hair so I could use it later. I thought about hot gluing it on, but I wanted to be able to use it again. 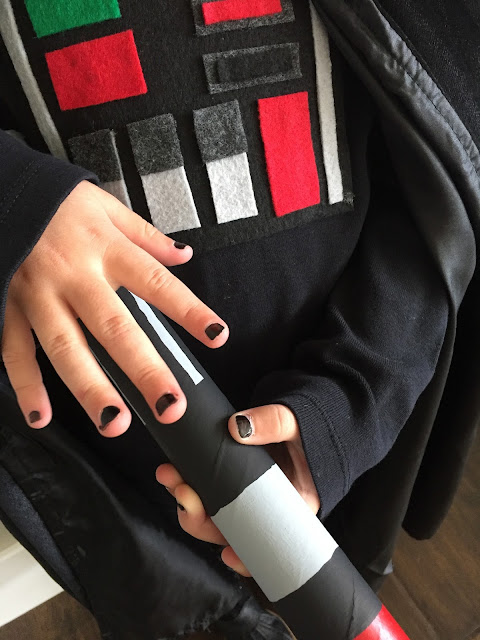 I got her black nail polish to help complete the costume. She loves having her nails painted!

When I took this picture I said, “Lets see those nails!” And she posed them like this herself. Such a little fashionista.

For the light saber, I painted an empty wrapping paper tube. I Googled “Darth Vader’s light saber” to see what type of style the handle was because believe it or not, the handles are different! 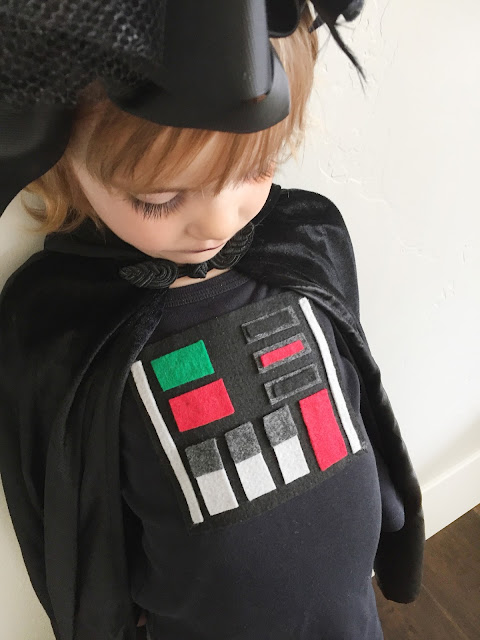 Showing off the chest piece. “Mom, (sticks out chest) get a picture of this too!” 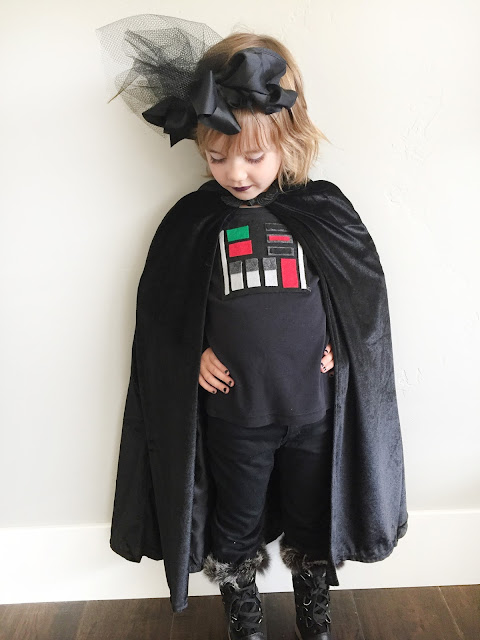 My mother in law bought the cape for her which gave the costume a topped off look!

And that’s it! I love how girls are starting to dress up like super heroes and such, but still have a feminine touch to them. (Like those giant tu-tu costumes. That’s what I’m thinking of.)