This week has been pretty awful. At the first of the week, I got an infection, then my baby got some sort of stomach bug and was throwing up and had diarrhea, and then there was the holiday, and then my husband got sick! (Like I said, I’m keeping it real!) I swear, it was the most I have ever washed so many sheets and made too many runs to Wal-Greens all in just a few days. I had promised the girls in my ward that I would show them how to make this toilet paper roll project that I had been working on for almost a year and had finally finished, and then life had to get in the way of me posting it. Family comes first, people, but I truly am sorry!

Anyways, here is how to make this Toilet Paper Roll Wall Decor: 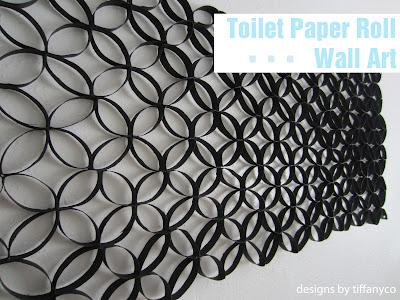 *Be warned that although results are fantastic and extremely cheap, it is a very time consuming project. I would suggest only taking up this project if you’re really tight with money and don’t mind having a mindless project laying around for weeks and even months.
Tools you will need:
a gazillion TP rolls
(I wish I had kept track of how many I had… sorry!)
good, sharp scissors
Allen’s all purpose craft glue
paint of your choice (I would suggest spray and craft paint)
clear gloss protective spray paint *optional
books to hold it together while it dries
lots of patience
Step 1: Start gathering TP rolls. This took me months! But if you have a big family, it shouldn’t take as long. Also, plan for 2x more than you would expect. Originally I thought I had gathered enough, but after I got started and used them all up, I realized I needed to start collecting them again. Which is one reason why this project took so long… Another tip I realized while doing this project is different brands of TP have different type of cardboard rolls: some are flimsier, some were a tad bit smaller than the others, paper towel cardboard rolls are skinnier and usually stronger than TP rolls. (Harder to cut if you know what I mean. You’re hands will get banged up with all of the cutting.) If you’re going for a perfect finish, I would suggest using the same brand for the entire project. I used two different brands for mine and I feel like you can’t even tell. But I did throw out all of my paper towel pieces because I did feel like they looked really different compared to the TP pieces. The two brands I used was Western Family and Costco and out of the two I liked Costco the best. They were sturdier and had crisper edges.
Step 2: Start cutting! I never measured out where all the cuts should be, but I found that having them not too skinny, but not too fat was the perfect size. You should be able to get 9 pieces out of 1 roll. If you happen to mess up (which clearly, I did) don’t throw it out! I had plenty of pieces that are too wide or too skinny and I feel like it’s not even noticeable once it’s put together! It’s kinda like an eye-trick, so it hides your mistakes very well. If you’re a perfectionist, by all means, go ahead and take the time. It would look fabulous! But I’m just letting you know that each piece doesn’t need to be perfect for the whole thing to look great. 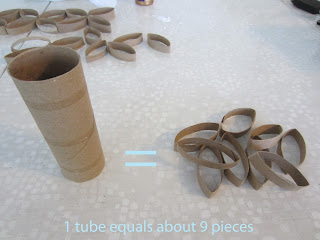 Step 3: After your hands are bruised, take a break and start gluing! Put some glue at the end and stick on two other pieces onto the side of it. Then take the fourth piece and add some glue and smack it into the two other pieces. It’s a good thing I have pictures to show this because I don’t think that makes a lot of sense… But you get it, right?

Then I liked to add a little more glue to the top for reinforcement. It probably wasn’t necessary, but that’s what I did.

Step 4: After you’ve done a whole bunch of the single ‘flowers’, start making your rows! Start by gluing the top and bottom edges and sticking it to another flower. Make sure they’re dry before you add onto them. Another reason why this project takes some time… This glue isn’t the fastest to dry.

Here’s some more pictorial examples of how to keep adding on to make your rows. Just do it a section at a time and make sure it dries completely before adding on.

Step 5: After making your rows, stick the rows together! This part can get kind of tricky, but with some thick books, it helps keep them together as they dry. Glue all of the edges and line them up the best you can. I did need to stretch and pinch some together to make them fit. 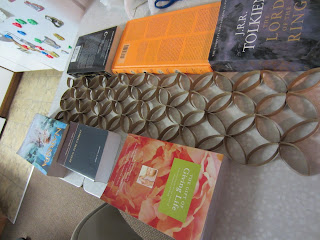 Here was when I thought I was finished, but after putting it up against the wall I wanted it on, I realized that it clearly wasn’t big enough. Reason #3 why this project took forever… I needed to go back and add onto it. 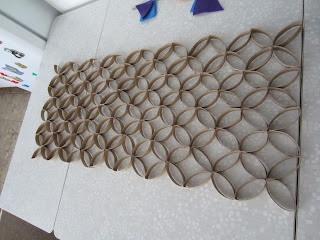 Now this looks a lot better! And bigger! It was getting pretty crazy to keep it together! 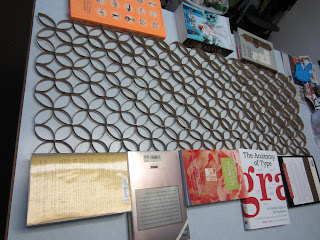 Step 6: Congratulations! You are now done with all of the blasted cutting and gluing! It’s time to paint! Now, I painted mine all by hand. Yeah, I know. I was crazy, but it was cheaper… I used one and a half bottles of craft paint (just the normal sized bottles) and a nice paint brush that was completely ruined because of this. I would suggest spray painting, because this took a lot of time. But I would imagine just by spray painting you still wouldn’t be able to get into all of the little nooks and crannies, which is why I suggested using both spray paint and craft paint. After a big chunk of the spray painting is done, go back and thoroughly paint by hand the spots that were missed. 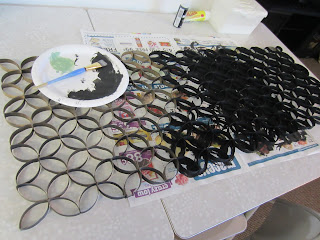 Step 7: (optional) After the paint is dry, spray on a protective layer to, well, protect it. You went through a lot to make this thing! Keep it nice! 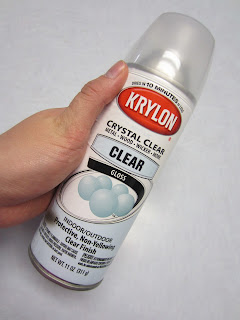 Step 8: Hang it! The nice thing about this piece of art is how light it is! I just used clear thumb tacks to keep it up. 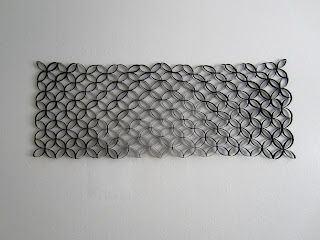 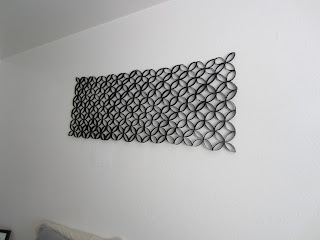 This isn’t all you can do with TP rolls. There are endless possibilities! Here are some other ideas you can do: